Not all pericytes are mesenchymal stem cells (MSCs). Indeed, specifically during angiogenesis pericytes of hematopoietic origin were demonstrated to be the major supportive cell type1, 2. 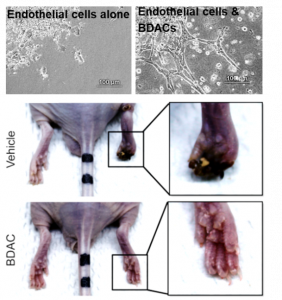 Using MMC we were able to source functional cells in clinically relevant numbers and time frame from an easy accessible cell source, namely peripheral blood. These BDACs were demonstrated to promote angiogenesis in vitro and in vivo and even rescue the affected limb in a murine pre-clinical model of critical limb ischemia (CLI)3.

By using BDACs, many limitations of current autologous cell-based therapies can be addressed. Hence, we are further exploring the functionality and mechanism of action of BDACs with specific focus on the treatment of ischemic diseases.