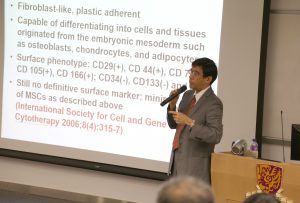 Prof. Oscar LEE delivered a talk on “MSCs for Liver Diseases: From Bench to Bedside” on 26 April 2019, who is an internationally renowned orthopaedic surgeon and stem cell scientist. He specializes in adult joint reconstruction and musculoskeletal tumour surgeries. Over the years, he has been devoting to the development of cellular therapies for musculoskeletal diseases such as bone and soft tissue tumours and ageing-related conditions including osteoporosis, sarcopenia and frailty. In his early career, he has pioneered to successfully isolate mesenchymal stem cells (MSCs) not only from human bone marrow but also from human umbilical cord blood, and other different types of tissues.

Prof. LEE not only has extensively studied the biology of osteogenesis but also has discovered the hepatogenic potential of MSCs. Liver transplantation is the primary treatment for various end-stage hepatic diseases but is hindered by the lack of donor organs and by complications associated with rejection and immunosuppression. There is increasing evidence to suggest the bone marrow is a transplantable source of hepatic progenitors. Through his study, Prof. Lee has previously designed a novel 2-step protocol with the use of hepatocyte growth factor and oncostatin M to differentiate various sources of human mesenchymal stem cells into functional hepatocyte-like cells in vitro. He has obtained two US patents for this finding (US8062632B2, US8216839B2). Furthermore, Prof. Lee has advanced “Bench-to-Bedside” by developing scaffolds for tissue regeneration using decellularizaton and nano-technologies. He proposed a cryo-chemical decellularization method which combines physical and chemical approach to generate acellular liver scaffolds (ALS) from the whole liver. The produced ALS provides a biomimetic three-dimensional environment to support hepatic differentiation of MSCs. Hepatic differentiation of MSCs within the ALS is much more efficient than two-dimensional culture in vitro. Importantly, the hepatic-like tissues (HLT) generated by repopulating ALS with MSCs are able to act as functional grafts, and will be suitable to support hepatic differentiation of MSCs and used to fabricate functional tissue-engineered liver constructs.

Over the decade, induced pluripotent stem cells (iPSCs) derived from the reprogramming of somatic fibroblasts, have been shown to resemble embryonic stem cells in that they have pluripotent properties and the potential to differentiate into all cell lineages in vitro, including hepatocytes. Thus, iPSCs could serve as a favorable cell source for a wide range of applications, including drug toxicity testing, cell transplantation, and patient-specific disease modeling. He also developed a rapid and efficient in vitro differentiation method for generating mature hepatocytes from human induced pluripotent stem cells. The protocol obtained one US and one TW patent (US9732323B2, TWI449789B). The hepatocyte-like cells derived from either human mesenchymal stem cells or human induced pluripotent stem cells provide therapeutic ability in animal model, and those techniques will offer a therapeutic opportunity for liver failure patients.

Recently, he has report that hepatogenic differentiation of MSCs is a reversible process and is modulated by DNA methyltransferases (DNMTs). The findings have further increased the understanding on the functions of MSCs after transplantation to treat liver diseases. In addition, it is well known that mesenchymal stem cells (MSCs) possess tremendous therapeutic potentials in acute liver failure through paracrine effects. Exosomes secreted by MSCs are the major effective components to exert such paracrine effects, and his group also focus on the theranostic potentials of exosomes in liver diseases.

Prof. LEE has published more than 120 peer-reviewed articles in leading journals such as Cell, Nature Communications, Nature Cell Biology, Gastroenterology, Hepatology, Nucleic Acid Research, PNAS, Blood and Biomaterials. Prof. Lee is the Associate Editor of Stem Cell Research &Therapy since 2015, and the Associate Editor of Cytotherapy since 2018. He has also served as editorial board member and reviewer for numerous journals related to orthopaedics, stem cell research and regenerative medicine. Prof. Lee is the Past President of Taiwan Orthopedic Research Society (2014-2016) and is Fellow of International Combined Orthopedic Research Society (ICORS). Prof. Lee has been elected President of Taiwan Association of Artificial Intelligence Research and Development in Biomedicine in 2018 and has been elected Vice President of International Society for Cell & Gene Therapy (ISCT) for 2019 to 2021.